We love our history here at Lone Cedar Cabins. So we thought we would give you a short rundown of the horse racing here in Hot Springs, Arkansas.

Even before the Civil War, the former pasture where Oaklawn Racing Casino Resort now stands was home to impromptu races between local farm boys riding their fastest ponies. Today, the track is Arkansas’s only thoroughbred horse racing venue and the lone remaining gambling center in a city once known as much for its casinos as for its famous thermal baths.

Following the 1903 repeal of anti-gambling laws, the owners of the Southern Club decided to build a racetrack on a site close to downtown. In 1904, they formed the Oaklawn Jockey Club and began construction shortly afterward. The name “Oaklawn” came from the rural community in which the track would be built.
Oaklawn Park opened on February 24, 1905. A holiday had been declared in the city to mark the occasion, and more than 3,000 people attended the first day of racing. The original venue reportedly cost $500,000 and could seat 1,500 spectators. It included innovations such as a glass-enclosed grandstand and steam heat—one of the first racetracks in the country with either.

Anti-gambling sentiments again rose in the form of a bill entitled “An Act to Prevent Betting in any Manner in This State on any Horse Race.” The bill was approved by the state government on February 27, 1907, and necessitated the closing of Oaklawn Park at the end of the 1907 season and for the decade following. The infield of the track was then used for the Arkansas State Fair.

By 1914, Oaklawn was owned by Louis A. Cella and his brother Charles, both of St. Louis, Missouri. The track has remained in the Cella family since then. In 1915, a bill to legalize horse racing and pari-mutuel betting passed in both houses of the legislature but was vetoed by Governor Hays. The veto was challenged in the courts by local citizens but was eventually affirmed by the Arkansas Supreme Court.

In 1916, the Hot Springs Men’s Business League reopened Oaklawn Park by setting a short racing schedule beginning on March 11 under the guise of a “nonprofit civic enterprise.” Pari-mutuel betting was not allowed, but this did not preclude any unofficial wagering. That year Pan Zareta, a.k.a. “Queen of the Turf,” won all three of her starts and won the mile handicap event that carried a $300 purse. That purse was a mere pittance by today’s standards. The Arkansas Derby in 1936 had a purse of $5,000 and now touts a $1 million first-place prize. The thirty-day season was a success and led to the reopening Oaklawn Park. This “nonprofit civic enterprise” allowed Oaklawn Park to continue to have races until 1919, when Circuit Judge Scott Wood put forth the opinion that continuing to hold the races was illegal, and the track was again closed. In 1929, another bill made it through both the Arkansas House and Senate only to be vetoed, this time by Governor Parnell.

Attempts to pass horse racing and pari-mutual betting in 1931 and 1933 both failed, but in 1934, a group of prominent Hot Springs citizens and businessmen, including Mayor McLaughlin, formed the Business Men’s Racing Association and announced that races would be held in March of that year. The move was inspired by growing national interest and the need to draw more visitors to the city. On March 1, 1934, Oaklawn reopened to a crowd of 8,000 spectators without the consent of the legislature. Future legal problems were avoided in 1935 with the passage of a bill to permit horse racing with pari-mutuel wagering. This time, the bill was signed into law by Governor Futrell.

Attendance at the track increased yearly, and in 1961, the thirty-day season was increased to forty-three days. By 1984, the racing season at Oaklawn Park had increased to sixty-two days a year.
The season now runs from middle of January into the first of May.

On a personal note, to have this caliber of horse racing in our small town is a privilege. All betting aside, to watch those beautiful horses run is exhilarating. The restaurants and gambling areas are well staffed and clean. Lone Cedar Cabins is only a short 20 minute drive away. Bring your best hat and join the festivities here in Hot Springs, Arkansas. 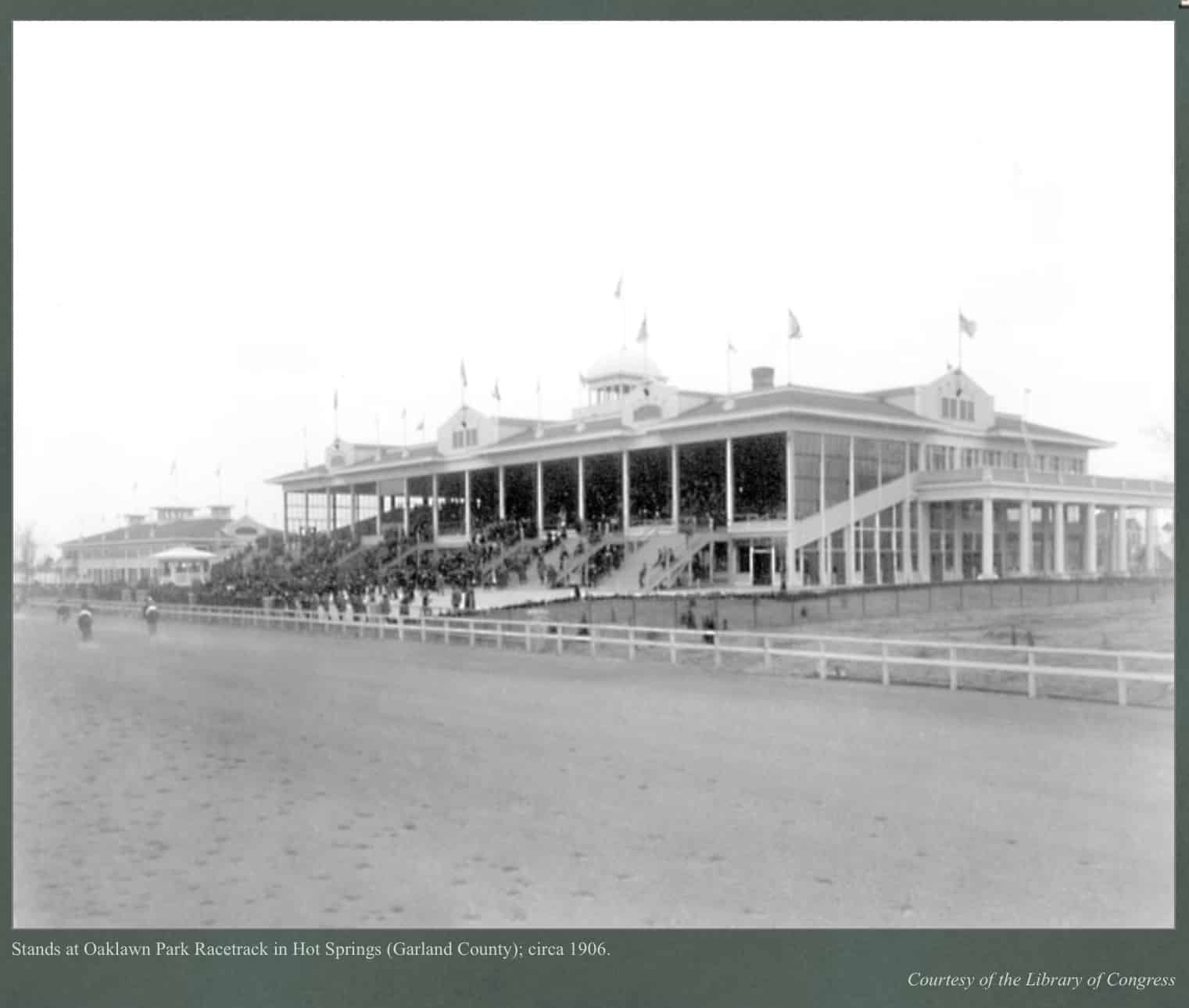