“The fireflies in the bushes

Prick the darkness all around

And the crickets, very busy,

And the grass is cold and dewy

after all the long day’s heat,

But the stepping stones set in it

Still are warm beneath our feet.”

In the Summer written by Dorothy Kelley Aldis, in 1896 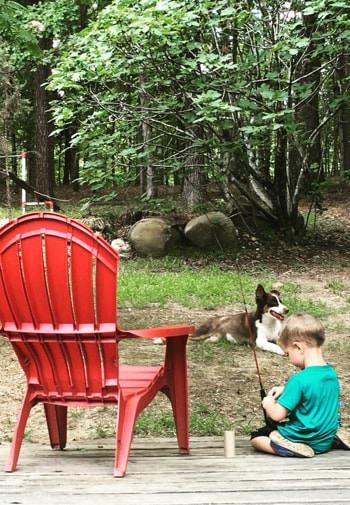 Lone Cedar Cabins…reflecting by the fire or sitting by our pond. As our summer starts to set in, we wish you and yours the best summer ever! Get outside, listen to the night sounds and soak it in. Here’s a few more to savor;

”They caught fish, cooked supper and ate it…But when the shadows of the night closed them in, they gradually ceased to talk, and with their minds evidently wandering elsewhere.”

The Adventures of Tom Sawyer

“…she got out of the truck and walked to the edge of the gravel and looked out over an alfalfa field to the moon…water ran from the ditch. The air was mild. Crickets and katydids called. A breeze rattled the weeds…”

“Sitting on the summer-night porch was so good, so easy and so reassuring that it could never be done away with. There were rituals…the lighting of the pipes, the pale hands that moved knitting needles in the dimness, the eating of foil-wrapped chilled Eskimo pies…”

Dandelion Wine by Ray Bradbury in 1920

So near you are, sky of summer stars,

So near a long armed man can pick off stars,

Pick off what he wants in the sky bowl,

So near you are summer stars,

Summer Stars by Carl Sandburg in 1878

“A pair of crickets sit at the edge of a quiet pond, beneath a giant willow tree, in the still summers twilight. Night sounds are just starting to be heard. The boy cricket rubs his wings together and begins his sundown song.